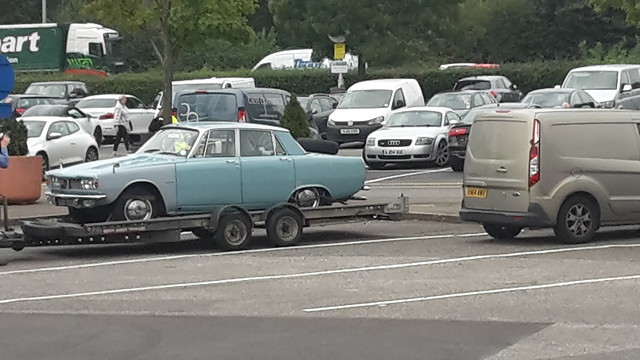 #2
any idea of the reg or location?
H

#3
No, there weren't any comments on the pic, and I only found it by luck while browsing away the boredom.
C

#4
Hi, I came across this the other day, probably already been seen before. -

#6
Hi, I would say it's Softly Softly because of the absence of Brian Blessed.

#7
colnerov said:
Hi, I would say it's Softly Softly because of the absence of Brian Blessed.
Click to expand...
Oh yes, I thought I couldn't hear him.....
H

#8
Thinking about that, was it him not being there that gave the programme its title?

#10
A little confusing that picture, Colin Welland ( third from right) was in Z-Cars but not Softly Softly so not sure why he's there.
S

#11
Now I've got that damn Z-cars theme running through my mind and it won't go away!

#13
Found this, caption next to the picture reads 'Colin Welland with the Z-Cars cast':

#17
EOO 700B. It's mine. I was just collecting it from oop north when this photo was taken. It should be back on the road this week hopefully.

#19
colnerov said:
Hi, I came across this the other day, probably already been seen before. -

View attachment 10812
Click to expand...
I looked at this thread earlier today and later picked up one of my books and thought 'I've just seen that photo' somewhere!

According to the book it was a photoshoot of the cast of 'the new edgy police series Z-Cars'. Dated 27 September 1965.

It didn't really click at first but the car's fitted with a sunroof; are they stood on the seats or did they take them out
ETA, Just realised there's an earlier post relating to it, which I missed, but photo had been lost.
Last edited: Feb 15, 2019

#20
chrisw , loving the picture of the 2 series 1 blue Rovers, what's the story on that piccie?

photo of "the new edgy police series Z-Cars" dated 27 September 1965 is brilliant, 'Barlow' looks so happy, his daughter was on TV a couple of months back being interviewed on what is was like while her father did Z cars and it was such a great interview
You must log in or register to reply here.
Share: Facebook Twitter Google+ Reddit Pinterest Tumblr WhatsApp Email Link
Top